The greatest barrier I have found to encouraging tourism to Palestine is a very well established and expensively crafted narrative that Palestine is an unsafe destination for foreigners. There is this narrative, particularly in Western countries, that Palestinians hate foreigners and wish to do them harm. Let me be clear, not once, in my 11 months in Palestine have I ever felt in danger because of a Palestinian.

I am a young, single, American woman, just out of college, and I have often walked the streets of Nablus, Hebron, Jerusalem, Ramallah, and Bethlehem on my own. I have actually never felt as safe and as welcomed in any other country I have travelled to as I do when I am here in Palestine. I am regularly invited into people’s homes and shops to share coffee or a meal, children regularly ask to take photos with me on the streets, and random men, women, and children on the streets will yell out “Welcome! Welcome!” as I pass by on the street. When you hear of incidents of violence in the West Bank you should go through those news stories and search for a time a foreigner was injured because 99% of the violence here in recent years has been between the Israeli army/settlers and Palestinians.

To clarify, life in Palestine can be quite dangerous for Palestinians, as they live under the constant aggressions of the Israeli military occupation. This violence does not affect foreigners visiting Palestine unless you decide to partake in a protest or demonstration against the Israeli government. I can say that the only time I felt in danger was when I attended demonstrations against the Israeli occupation and I witnessed tear gassing and rubber bullets being fired on protesters. It is not easy to just wander upon a protest in Palestine, so the only way you are likely to find yourself in danger is if you choose to put yourself in such a position.

As a young woman, walking alone at night in certain areas such as the center of Ramallah, or near some of the refugee camps may lead to cat-calling or verbal harassment. Based on my own experience and that of other foreign women here, we have found that cat calling, verbal, and sometimes physical harassment, tend to be higher in Ramallah and Bethlehem and lower in more conservative areas like Hebron and Nablus. This harassment also tends to be concentrated during the night or when you are walking alone on an empty street. Young men are likely not to harass you in front of other Palestinians because they and their families would be seriously shamed for such an act, this is why it is best to stay in populated areas.

Personally, I have found walking alone to be fine and I am never afraid to walk alone. I also choose to dress quite modestly to decrease attention to myself; but, to err on the side of caution when you first arrive, I would suggest traveling in groups until you get to know an area. Unfortunately, it is also true that you will not face harassment if you are with a man. As I worked as a teacher in the largest refugee camp in the West Bank, I would say walking through refugee camps is not at all a problem as a solo female, but again I would go during the day, or accompanied by a man at night.

NOTE: This section should not deter any women from visiting Palestine as I truly believe that if you use sound judgement (as with any traveling), you will be safe and thoroughly enjoy your experience. I decided to be quite specific in this section not to scare anyone away, but because I always believe it is better to be over-informed as a female traveler than under-informed.

Areas Not to Enter:

The only areas I would say are off-limits for foreigners, are areas that tend to be empty late at night such as the settlements in Hebron or the Old City of Hebron. I also would not walk through the refugee camps at night alone, largely because they tend to be somewhat maze like and they will be pretty empty at night, so unless you know your way around it may be easy to get lost. Also refer to the section above about it being best for solo female travelers to only walk alone at night in populated areas in order to decrease any chance of harassment.

If you choose to attend a protest in the West Bank you should read up on the different methods of suppression used by both the Israeli Army and the Palestinian Authority at protests. Typically it will entail tear gas, sound bombs, rubber bullets, and depending on the protest—live bullets.

You should come prepared and understand how to react in the case of any form of violence including arrest or detention. This means not only knowing your health insurance coverage but  also the number for your embassy and your legal rights. As someone who has attended protests against the Israeli Occupation, I would recommend staying near the back and away from the young men throwing stones since they will be the focus of the Israeli army’s aggressions. However, innocent bystanders have been injured at protests, so please take care.

An important clarification to make is that the West Bank is not the same as Gaza. Entry and visitation of Gaza is restricted to a very limited number of foreign journalists and humanitarian organizations as the Israeli military has closed the border to Gaza for over 12 years. There are flare ups of tension including rockets being fired by both Israel and political groups in Gaza as well as protests led by Gazans along the border. However, due to the geographic separation of Gaza from the West Bank, such flare-ups should have no effect on your plans to travel through the West Bank.

NOTE: you should watch the situation carefully because another ground or arial war by the Israeli military against Gaza will likely result in many protests and possible flare ups within the West Bank. As of this edit (May 2019), the situation in Gaza should in no way hinder your travel plans to the West Bank.

The main instance when you, as a foreigner, will have to interact with Israeli soldiers in the West Bank is upon passing through checkpoints. When you enter the West Bank, usually from Jerusalem, you will not have your ID checked or any questions asked. The only time your passport will be checked is when you wish to return to Jerusalem, re-enter Israel, or if you wish to cross into Jordan. When you exit the West Bank to Jerusalem or Israel they will ask to see the small blue slip of paper (which you receive at the Airport or Bridge) which acts as your visa to be in the country. If you are not on a bus, you will likely have to walk through a checkpoint which usually entails waiting in a line and then walking through a metal detector and having your bag scanned (similar to airport security, but with worse lines and more racism). Foreigners are almost never questioned at these checkpoints and I have never personally faced harassment from soldiers here.

Within Hebron there are also checkpoints throughout the Old City/near the Israeli settlements, and outside the Ibrahimi Mosque. Here you may face questions from soldiers about the purpose of your visit, and my suggestion is always that you do not have to be friendly with them, but being rude or offensive will only cause problems for you. As a foreigner you are allowed into every part of the city, including the settlements and Shuhada Street, so do not worry when passing through these checkpoints. 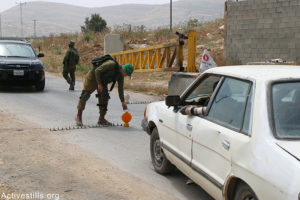 Finally, there is the possibility of “flying” checkpoints along the roads. This can happen if there is an incident of violence or just because someone in the Israeli military feels like it. I have only run into such “flying”  checkpoints around Muslim holidays, and in this case they will stop the car ask everyone for their passports and sometimes they will search the car (although they will not typically do this with foreigners present).